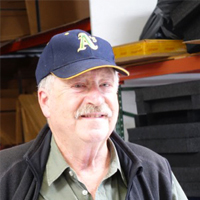 As a graduate student in architecture at the University of California at Berkeley, John Lewis was introduced to blown glass by professor Marvin Lipofsky. Lewis founded the first private hot glass studio in California and later received his MA in design in 1970. His early work in blown glass led to an interest in glass casting. With the help of an NEA grant, he built an experimental facility to explore the possibilities of cast glass. John Lewis Glass Studio is now considered one of the largest privately owned hot glass studios in North America.

At his state-of-the-art casting studio in Oakland, CA, Lewis designs and produces cast glass sculpture, tables, vessels and site specific architectural projects. He has completed numerous commissions for private and corporate clients and is represented internationally by galleries.

John is a long time resident of Oakland and is committed to the future of the arts in the city through his support of local artists, museums and schools both financially and in his role as a mentor, teacher and innovator. His ongoing goal is to contribute to improving the area surrounding the studio and to encourage the growth of the artist community in East Oakland.