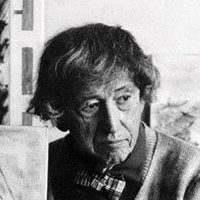 John Marin was an American painter and printmaker especially known for his expressionistic watercolour seascapes of Maine and his views of Manhattan.

After working as an architectural draftsman, Marin studied painting at the Pennsylvania Academy of the Fine Arts in Philadelphia and at the Art Students League of New York City. In 1905 he went to Europe, where he was influenced by the watercolours and etchings of James McNeill Whistler. Marin remained largely unaware of the new movements in European art until 1910, when he returned to New York. There, at Alfred Stieglitz’s “291” gallery and at the Armory Show in 1913, he became familiar with Cubism and the various schools of German Expressionism. Influenced by those movements, his own style matured into a very personal form of expressionism, exemplified in works such as The Singer Building (1921) and Maine Islands (1922).

Artists usually employ watercolour to produce only delicate, transparent effects, but Marin’s brilliant command of the medium enabled him to render the monumental power of New York and the relentless surge of the sea on the Maine coast. His concern with force and motion led him to produce works such as Lower Manhattan (1922) and Off York Island, Maine (1922), in which objective reality is hardly recognizable amid the activity of the canvas.

From the 1930s Marin increasingly painted with oils. In works using this medium, such as Tunk Mountains, Maine (1945), he often employed the watercolour technique of dragging a nearly dry brush across the canvas to achieve an effect of lightness and transparency.