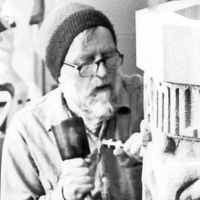 John Norris Maakestad was born in Whitehall, Wisconsin, the son of the Rev. Norvald and Agnes (Linnevold) Maakestad. He grew up in Rochester, Minnesota, and graduated from Rochester High School in 1946. He then attended St. Olaf College, graduating in 1950 and was then drafted into the Signal Corp of the 31st Dixie Division during the Korean Conflict. He was discharged in 1953. John and Barbara Shefveland were married in 1951.

After the Army he spent three years at the University of Iowa in Iowa City where he received his Master’s of Fine Arts degree and went on to teach in the Art Department of St. Olaf College from 1956 until the time of his retirement in 1994. During those years he taught the full range of studio art classes and helped to develop a major in Art History. He was longtime chairman of the Art Department and was involved with hiring cornerstones of the current department. He was also deeply involved with college matters and served on many committees and posts.