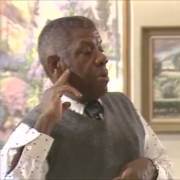 When John Robinson moved to the Garfield section of Anacostia (Southeast Washington, DC) in 1929, he immediately began painting the scenes he saw around him in the community. A serious artist, he first began painting as a youth, fitting in his art work after school. After he quit school to help support the family, he continued to paint during time set aside from his many jobs. While helping his grandfather at the Key Bridge Garage in Georgetown, a chauffeur based there introduced Robinson to people who, in turn, brought him to the attention of important members of Washington’s African-American artistic community. Both James V. Herring, head of Howard University’s Art Department, and James A. Porter, an eminent art professor, assisted him and gave instruction in painting.

Beyond his intimate scenes of family and community life, Robinson also completed many public works on a large scale. His first church mural was Christ at Gethsemane at Emmanuel Baptist Church in Southeast Washington, DC, and he did many other religious paintings for churches in Southeast and Southwest D.C. Aside from landscapes and street scenes of Anacostia, Robinson also became well known for his paintings of family life and works featuring the lilacs of Anacostia.