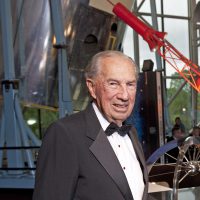 John Safer has had a unique career. An internationally renowned sculptor throughout the latter half of the twentieth century, Safer at the same time was a successful entrepreneur who went on to become a major figure in banking. In the field of art, the New York Times compared Safer’s position as a sculptor to that of Georgia O’Keeffe as a painter and Ansel Adams as a photographer. The U. S. Department of State sent John Safer sculptures abroad to be exhibited as an example of America’s finest art. His works today stand in over one thousand private collections and public sites and have been exhibited in museums, galleries and embassies throughout the world. Ascent, a 75 foot high work, described as one of the great public sculptures of our time, stands at the entrance of the Smithsonian Institution’s National Air and Space Museum at Dulles Airport.

At 90, Safer continues to create sculpture. He works with his stepdaughter Kathryn Scott, to whom he taught his trade and offered his mantle. Safer and Scott collaborated on a monumental work, Quest, for the Johns Hopkins Wilmer Eye Institute. The 35-foot-high stainless steel sculpture is one of the largest works of art that Johns Hopkins has received.