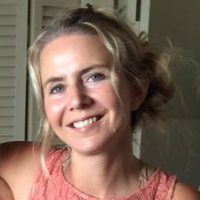 Julie Blackmon is a photographer who draws upon her experience growing up with a large family to create award-winning photographs. She was born in Springfield, MO, and is the oldest of nine children. Blackmon studied art education and photography at Southwest Missouri State University. While at the university, Blackmon became interested in the Contemporary photography of Sally Mann and Keith Carter. She takes the elements of normal family life, using her own three children, and changes it from the merely documentary to an exploration of the fantastic parts to everyday life.

Blackmon has been known to mix the everyday with the fictitious for sometimes humorous, and often touching, photographs. Mind Games (2004) was Blackmon’s first major body of work. The series explores childhood play through black-and white-photographs. The photographs focus on both external objects and internal imagination, the combination from which play is derived. The grouping won Blackmon her first Merit Award from the Society for Contemporary Photography, Kansas City, MO, in 2004.

Carefully placed props are often a major part of Blackmon’s photographs, evoking the works of the early Danish and Flemish painters, notably Jan Steen. For her second major work, Blackmon switched from black-and-white to color film for a series of whimsical shots of family life. She set many of these photographs into collage form and titled the series Domestic Vacations (2006). In 2006, the series received first-place honors at Photospiva, after having been judged by one of Blackmon’s favorite photographers, Keith Carter. Blackmon is typically known for photographing just one child at a time.