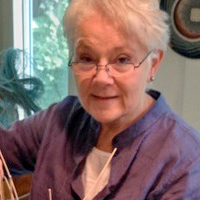 Kari Lonning has been a full-time contemporary basketmaker since 1975. She is best known for her double-walled constructions and a complex weaving process she refers to as her “hairy technique.” She works extensively with graphic patterns, using both bold and subtle color schemes. She dyes the natural rattan reed with commercial, colorfast textile dyes for depth of color and longevity. Her interest in patterns and complex weaving techniques began in college where she minored in textiles, while many of her vessel forms reflect her college major – ceramics. Basketry became the natural union of the two.

Kari designs and weaves all the baskets herself. Her work is in numerous public and private collections including the White House Craft Collection, the Renwick Gallery of the Smithsonian Institution, the Mint Museum in Charlotte, NC and the US Embassy in Bangkok, Thailand. Kari is the author of “The Art of Basketry,” a comprehensive resource on design and construction techniques for contemporary basketry. In 2007 and 2008 Kari won awards for her work from the Smithsonian and Craft Boston craft shows.

When Kari isn’t working on baskets, she and her Old English Sheepdog, Emma, are often in the garden or greenhouse. Plants, with all of their color variations and textures, are a major source of inspiration, as is her facination with building structures and her respect for architectural space.