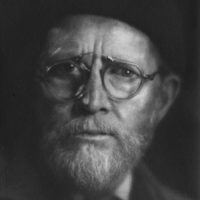 Sven August Knute Heldner was born in Vederslov, Sweden. At the age of 17, Heldner signed on as a cabin boy for a cruise shipping line making passage to Boston, Massachusetts. Once in America he made his way west toward the Scandinavian cultures of the north woods in Minnesota, where he worked at a variety of odd jobs while struggling to become a painter. Heldner’s first break as an artist occurred in 1915 when he won a prize at the Minneapolis State Fair, receiving $100. He parlayed this money into a career, began showing his work in Chicago and in the east, and by 1923 had achieved at least a modest international reputation. In 1923 Heldner came to New Orleans for the first time to spend the winter. Although he would maintain associations with both Sweden and Minnesota for the rest of his life, he made New Orleans his principal base thereafter.