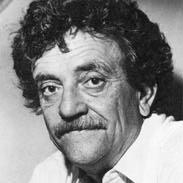 Kurt Vonnegut, Jr. was born in Indianapolis, Indiana to fourth-generation German-American parents, son and grandson of architects in the Indianapolis firm Vonnegut & Bohm. He graduated from Shortridge High School in Indianapolis, and later attended Butler University in Indianapolis for a short time before transferring to Cornell University, Ithaca, New York, where he studied biochemistry and worked for the student newspaper.

During World War II, Vonnegut fought in the Army, was taken prisoner of war, and was awarded a Purple Heart for having been wounded in the Battle of the Bulge. His war experience, along with the suicide of his mother in 1944 on Mother’s Day, had a profound impact on his work. He is a distinguished author of books such as Breakfast of Champions and Slaughterhouse-Five. After the war, he attended the University of Chicago, Illinois, which eventually awarded him a Master’s degree in 1971 for his novel, Cat’s Cradle. Vonnegut died at the age of eighty-four in New York City from complications resulting from a fall at his home.

Vonnegut’s work as a visual artist began with creating his own illustrations for Slaughterhouse-Five and developed with Breakfast of Champions, which included numerous felt-tip drawings. From 1993 onward, he collaborated with artist Joe Petro III on a range of silkscreen prints. He also created an album cover for the band Phish called Hook Line and Sinker, which is currently on view at the Rock and Roll Hall of Fame. Critic Peter Reed has commented: “Less familiar than the fiction, however, are Vonnegut’s creations in the graphic arts. These reveal the same postmodern heterogeneity, the fantastic and the mundane, sentiment and irony, humor and melancholy.”