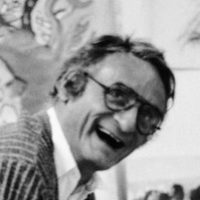 Born in New York City, as Yitzroch Loisa Grossberg. He began his artistic career as a jazz saxophonist and changed his name to Larry Rivers. He turned to visual art in the 1940s. Responding to the Abstract Expressionists, Rivers explored figurative work as evidenced in a series of nude studies from 1954. He was an excellent draftsman inclined towards the culturally provocative. He was one of the first artists to include popular images in his paintings placing him at the forefront of the Pop Art movement. At the height of his career, the 1960s, he continued to paint the figure, often including elements of stenciled lettering and photography. His artistic contributions are marked by clever irony with subject matter, ranging from the erotic to social concerns, and are not confined to fine art alone. Rivers is also recognized as a stage set designer, musician, documentary filmmaker and University of California at Santa Barbara professor.