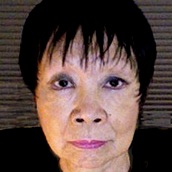 Laura Yang works and lives in Wilmington, Delaware. She was born in China and became a naturalized United States citizen. In 1977 she moved to Sao Paulo Brazil where she started her study of oil painting and drawing at the studio of the Italian colorist painter Francesco Galloti. In 1985 upon returning to the U.S. she attended the Vermont Studio School. She also studied in Todi, Italy, and worked with the late artist Stephen Greene at the Art Students’ League in New York City.

The experience of living in various countries has enriched Laura’s perspective of
human life. She became interested in all the different cultures and the multilayers of expression in art. Over the years she has developed her skill in different disciplines of art, such as oil painting, ink drawings, digital photography, digital montage, digital painting and public art.

Laura has exhibited her oil paintings and ink drawings in one artist show at venues
including the Philadelphia Art Alliance, Philadelphia, PA, the Rehoboth Art League,
Rehoboth, DE, the Art Gallery of the University Villanova,Villanova, PA, and at the RTKL Architecture, Designing, Engineering Company, Baltimore, MD. Her work has also been featured in numerous group exhibitions, including the Wayne Art Center, Wayne PA, the Hoyt Institute of Fine Arts, New Castle, PA, the Butler Institute of American Art, Youngstown, OH, the Masur Museum of Art, Monroe, LA, the Fredericksburg Center for the Creative Arts, Fredericksburg, VA, the Main Line Art Center, Haverford, PA.

In 2002, she was commissioned to design a 2800 square feet art tile mural for the
fourth floor at the Daily Garage of the Baltimore Washington International Thurgood
Marshall Airport, MD, which was completed in 2005. This whole project received an Award of Excellence for Parking Facility Design from the International Parking Institute in 2007. From 2002 to 2004 she was invited by the Art in Embassies Program of the U.S. Department of State to participate in an exhibition at the U.S. Embassy in Port Louis, Mauritius.

In 2005, she underwent ankle surgery and was advised by the surgeon to stay off
her foot for six months. To satisfy her desire to continue to work in art, she bought a laptop computer and began to study digital art. Within five years her digital prints were in about 50 exhibitions nationally. She received the second prize at the Northwest Cultural Art Council, Rolling Meadows, IL while another print was bought by the Larson Gallery and Museum, Yakima, WA, for its’ permanent collection. Her prints have also been exhibited at the University of Richmond Museums, VA, the Nathan D. Rosen Museum Gallery at the Adolph & Rose Levis Jewish Community Center, Boca Raton, FL, the Slocumb Galleries, East Tennessee University, TN, the Delaware Art Museum, Wilmington, DE, the Chattahoochee Valley Art Museum, La Grange, GA, the Arlington Art Center, VA and LSU Student Union Gallery, Louisiana State University, Baton Rouge, LA. Her works are in private and public collections in the United States, Hong Kong and Switzerland.