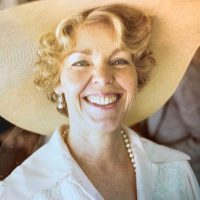 Helen “Leni” Stern was a painter and sculptor, philanthropist, and art collector influential in establishing the contemporary art scene in Washington, D.C. Stern was a talented artist who created Plexiglas sculptures, usually more than six feet high and shown in galleries around the 1970s. A Washington Post art critic said: “To see them, one must move, for interacting there within those spires are voids and planes, sharp edges, and soft Brancusi curves. Seen from here, one internal plane is just transparent; move, and it becomes a mirror; move again and it refracts and little rainbows shine.”

After marrying her second husband and heir to the Sears Roebuck fortune Philip M. Stern, the couple moved to Washington, D.C., in 1957, where she created a company that rented artworks to businesses and private individuals. In 1962, she cofounded the Washington Gallery of Modern Art, which inaugurated a major retrospective of abstract expressionist Franz Kline and hosted shows featuring artists Frank Stella, Robert Rauschenberg, Jasper Johns, and Edward Kienholz. Stern advocated for the career advancement of artists from the Washington Color School by opening the historic exhibition Washington Color Painters, which benefitted the burgeoning art movement led by Sam Francis, Paul Reed, and Kenneth Howland. In 1968, the Washington Gallery of Modern Art merged with the Corcoran Gallery of Art. Before her gallery closed after six years, Stern spearheaded a fundraising and membership drive to restore some measure of financial stability and hired its last director Walter Hopps, one of the most iconic and visionary curators of the twentieth century. She was an active participant in antiwar demonstrations and the Civil Rights movement. Stern wrote a 1968 book with her second husband, O Say Can You See By the Dawn’s Urban Blight, featuring photographs that highlighted systemic racism and class stratification among Washington, D.C.’s wealthier and impoverished neighborhoods. She lived in Cuernavaca, Mexico, as an art teacher and benefactor of a local orphanage before returning to Washington, D.C., in the early 1990s.