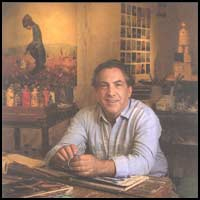 Leslie Lerner’s paintings depict landscapes with figures and other Images arrayed to tell stories, typically part of several long running series, “My Life in France”, “A Poor Boy’s Tale” and now “My Life in America”. They contain hints of such Influences as Breugel, Turner, Goya and particularly, Watteau. One also sometlmes thinks of the tongue-in cheek humor of the contemporary conceptual master John Baldessari and the mystery of the legendary film maker Alfred Hitchcock. They really reflect a highly complicated, fertile imagination and transport the viewer into a world replete with references to how life might have been lived and how it is lived today.

But the work is uniquely his; no one is creating paintings like these. They are usually acrylic and other media, exquisitely crafted, on canvas, panel, paper and sometimes small pieces of copper; handsome and compelling.

Lerner’s art is in the collections of the Norton Gallery of art of Palm Beach, the San Francisco Fine Art Museum, the Oakland and Scottsdale Museums, the Kohler art center in Sheboygan, Wisconsin, the De Siasset Museum of Santa Clara, Stanford University’ Museum of Art, the Universities of Missouri and Wisconsin, the Ringling Museum, the Corcoran and National Galleries,of Art in Washington, and the Museum of Modern Art In New York. His work was featured in one- person exhibits at the Tampa Museum of Art In 1995 and at the Greenville (S.C) County Museum of Art in 2000. “The Man with the Wooden Arm: The Imagined City”, a multimedia exhibition Including paintings, three dimension architectural forms, prints, drawings and text, was featured at the University of South Florida’s Contemporary Art Museum, the John and Mable Ringling Museum of Art, and the Palo Alto Art Center in 1999.

Lerner was an Instructor at the Fine Arts Department at the Ringling School of Art and Design.