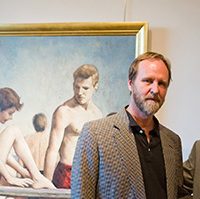 Lewis Bryden was raised in south Florida and has lived in New York since 1973, with 14 of those years spent in Brooklyn. He started the “Boardwalk Idyll” series in 1980. “Perhaps the fascination was because of the resemblances to the beaches of Florida combined with the gritty realities of the big city, or perhaps it was the cosmopolitan mix of people who come to enjoy themselves in such a public place,” Bryden muses. “In any case, I use the great diversity of people and architectural settings in Coney Island as constant inspiration.”

Lewis Bryden worked as an architect for a number of years before becoming an artist full time. He has exhibited in several New York galleries, and his work is featured in books such as The Artist and the American Landscape by John Driscoll, Changing Prospects by Marianne Doezema and Paintings of New England by Carl Little.