In a world where we are bombarded with sleek bodies and seductive poses, it can be refreshing when someone makes a point of exposing the flawed human figure that we all really are.

Li Jin is such an artist. He doesn’t just portray the human form with all its imperfections and blemishes, but he celebrates them. Relishing in the banal, he focuses on everyday activities such as bathing, eating, reading…or simply doing nothing at all. His subjects, more often than not, appear to be caught by surprise; rather as though snapped by an intruding photographer…not that this seems to bother them. In fact, Li Jin’s semi-clad figures appear to be remarkably content in their far-from-perfect skins. Tires of fat around the tummy area are hardly ‘the look’ to which modern day women (or men for that matter) aspire. And certainly one could be forgiven for being bashful when bathing or using the toilet. Not Li Jin’s figures! The characters in his paintings have a very relaxed and at easy quality to them, appearing entirely unaffected by modern society’s emphasis on bodily and facial perfection. They are not concerned whether they are too fat or too exposed. They are very natural, almost Adam and Eve-like, and appear to enjoy a very comfortable state of existence.

There is a certain shock-value to these paintings. When people first see Li Jin’s work they ask, “Are they really sitting on the toilet?” or “Why would he paint such an unflattering body?” Yet gradually there is a realization that these scenes are daily rituals in which all humans partake. In fact, why should we be embarrassed or self-conscious by such commonplace habits? Li Jin is breaking down societal boundaries and he encourages us to take ourselves less seriously. During the Cultural Revolution in China, people were encouraged to hand over the bulk of their possessions to the state so there was little sense of ownership. As such during this period, most things, including bathing and toilet facilitates, where shared meaning that privacy was quickly forsaken. Besides, people were too busy thinking about the basic things in life, namely survival, to dwell on such trivia as the preservation of modesty.

The sense of a communal spirit in Li Jin’s work is occasionally bolstered by the inclusion of a small dog, full of expressive character. Li Jin rarely incorporates children into his paintings and so the dog acts almost as a substitute-child lending a familial impression and adding warmth to the work. A dog, by nature an animal that is never happier than when surrounded by humans, enjoys the simple life – food, rest, play and mating. Li Jin’s figures, share these simple desires. The parallel between dog and human is underscored by the very fact that their facial expressions are equally comical. In one of the paintings a dog is even bathing with its owners and is blissfully at ease that he is drooling with his tongue hanging out. Unsurprisingly perhaps, when one considers that Li Jin’s male’s figures are loosely based on himself, the artist himself owns a dog and his Chinese birth sign is even the year of the dog.

Yet while Li Jin’s paintings celebrate the most basic and ordinary of life’s rituals, it is clear that he reserves a special affection for the opposite sex. The women, despite their plump figures and vacant facial expressions are nevertheless generally graceful, feminine and somehow attractive. When clothed they wear colourful and delicate floral patterns, suggestive perhaps of a woman’s blooming but altogether short-lived ripened beauty. The women’s facial expressions are not dissimilar from those of the male characters, yet their features have a more delicate quality to them with smaller noses and mouths. This gives them a special kind of charm that the men with their larger, plumper and more squared faces do not have.

Li Jin’s painting technique, while using the traditional medium of Chinese ink on paper, is modern and innovative. The artist is able to achieve extremely expressive faces with a minimum amount of lines and colours. He breaks an image down to its minimum; the background is empty and unpainted, leaving just the colour of the paper he paints on. The figures have few details on their faces other than small eyes, eyebrow lines, the ends of noses and closed lips. Here and there on the faces are dabs of colour and there is facial hair for the men. Li Jin’s technique looks simple, but so much expression is difficult to achieve, and it has taken the artist many years of dedication to his craft in order to be able to accomplish it.

This sensuous new collection, which centers on the theme of springtime, is testament to an artist whose talent is ever blossoming. Spontaneous brushwork, idiosyncratic captions and the oftentimes brazenly intimate choice of subject matter are the markings of his distinctive style. Li Jin fuses past with present, but the effect is unmistakably modern and fresh. While he delights in the ordinary Li Jin is an artist who is anything but. His engaging and unpretentious style makes him one of China’s most universally adored and highly in demand artists. 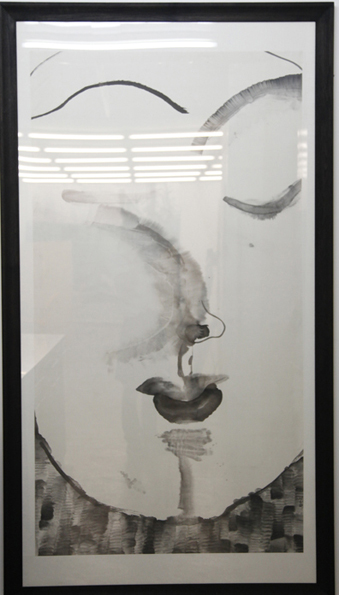