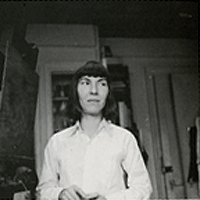 Loren MacIver developed a prosperous artistic career at an early age. At the age of thirty, the dealer Pierre Matisse began to exhibit and represent her work. In 1935, the Museum of Modern Art purchased her painting Shack, making her the first woman artist to be represented in the permanent collection. She continued to be included in landmark exhibitions such as Fantastic Art – Dada – Surrealism, and New Horizons in American Art, both at the Modern. Her work was also in the American Pavilion at the 1962 Venice Biennale. She continued to show her work at major museums nationally and internationally until her death in 1998.