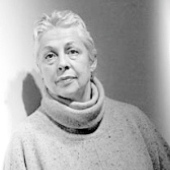 An important sculptor for more than three decades, Lynda Benglis also produced a pioneering body of feminist video in the 1970s. Immediate and visceral, Benglis’ performance-based video work confronts issues raised by feminist theory, including the representation of women, the role of the spectator, and female sexuality. Benglis also engaged the emergent practice of video in an incisive discourse on the production of the moving image.

Lynda Benglis was born in Lake Charles, Louisiana in 1941. She received a B.F.A. from Newcomb College. Her work has been shown at the Museum of Contemporary Art, Los Angeles; San Francisco Museum of Modern Art; Tate Modern, London; The Museum of Modern Art, New York; Whitney Museum of American Art, New York; Walker Art Center, Minneapolis, MN; Solomon R. Guggenheim Museum, New York; Philadelphia Museum of Art; National Gallery of Art, Washington, D.C.; the 39th Venice Biennale; Cheim & Read and Franklin Parrasch galleries in New York, among many other venues. In 2009, a retrospective of her work was exhibited at Van Abbemuseum, Eindhoven, Netherlands, which then traveled to the Irish Museum of Modern Art, Dublin; on to Le Consortium, Dijon, France and the Museum of Art, Rhode Island School of Design, Providence, Rhode Island in 2010, and finally to the New Museum of Contemporary Art, New York in 2011. She has been awarded two grants from the National Endowment for the Arts, as well as a John Simon Guggenheim Memorial Foundation Fellowship and an Australian Council for the Arts Award. She has taught at the School of Visual Arts, the University of Arizona, Yale University, Princeton University and the California Institute of the Arts, among other schools.