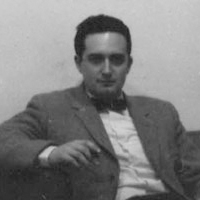 Lynn Leland was born in 1937 in Buffalo, NY. He studied at Pratt Institute in New York, and was awarded a Fulbright Scholarship to study in Europe in 1961, where he attended the Hochschule für Bildende Künste in Hamburg studying with the British sculptor Eduardo Paolozzi.

Returning to New York, he exhibited at The Preston Gallery and A.M. Sachs Gallery and, on the recommendation of the curator Henry Geldzahler, his work was included in the influential exhibition ‘The Responsive Eye’, held at The Museum of Modern Art in 1965. His work was also included in the following group exhibitions; Albright-Knox Museum, 1960; Brooklyn Museum Biennial, 1960; “Optics & Kinetics”, Ohio University, 1965-66; “Multiplicity”, ICA, Boston, 1966; The Jewish Museum, 1966 (works from the Harry Abrams collection).

Throughout the 1960s, Leland’s abstract work remained focused on the optical effect of ordered grids of colored circles – based partially on the artist’s interest in contemporary musical composition. However, by the early 1970s he had become disillusioned with the art market and stopped exhibiting, focusing instead on a career as an art educator.