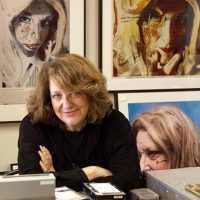 The majority of Leeson’s work explores performance art and film simultaneously. She is known for her pioneering use of new technologies and videos that investigate societal and cultural issues. Leeson worked with documentary filmmaker Eleanor Coppola on The Dante Hotel, the first performance art installation outside a gallery setting. Various artists would rent Leeson’s hotel room and furnish it with miscellaneous objects, signifying Leeson’s interest in multiple strata of life in a place or site. She infuses some works with elements of disguise. From 1973 to 1978, Leeson created alias Roberta Breitmore, using wigs, clothing, and other changes to present the fictional character with a real identity. This persona highlighted three feminist themes: a woman’s relationship with the outside world, victimization of a female subject, and the process of achieving personal power through the media. Throughout the 1980s and 1990s, Leeson created videos and built telerobotic pieces emphasizing those themes, specifically an interactive videodisk artwork called Lorna, in which the viewer used a remote control to help Lorna navigate through her decisions. She embarked on the Guggenheim Memorial Foundation fellowship and was honored with grants from the National Endowment for the Arts and Creative Capital. Her works have been exhibited worldwide, namely the Montreal Museum of Fine Arts, Quebec, Canada, and the Los Angeles County Museum of Art, California. Public collections include the Museum of Modern Art, New York; the Wilhelm Lehmbruck Museum, Duisburg am Rhein, Germany; and the National Gallery of Canada, Ottawa, Ontario.