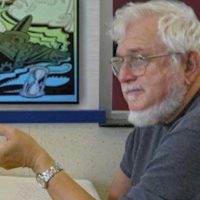 Lynwood Kreneck (b. 1936) describes himself as a narrative artist: “My prints and drawings are often vignettes which describe or interpret what could be described as a moment related to the human condition…I seek to strike a familiar chord in some viewers who might think, ‘I never saw things quite that way, but I think I may have been there or experienced something very similar.’”

The Texas-based artist earned his Bachelor of Arts and Master of Fine Art degrees at the University of Texas, Austin, majoring in printmaking, and married textile artist Ellie Kreneck in 1959. Kreneck is currently professor emeritus at Texas Tech University, Lubbock, where he teaches printmaking. The artist is credited with inventing water-based screenprints, having collaborated with the art company Createx to develop a less toxic, transparent base for mixing various acrylic colors and demonstrated his research in the United States, Europe, China, and New Zealand. Kreneck is the founder and director of the national print exhibition Colorprint USA, which ran for forty years. He traveled across the country in 1969 to establish connections with contemporary artists and showcase their works in the show. During its 1998 nationwide exhibition, he gathered an edition of fifty prints from one printmaker in every state. Kreneck has served as a visiting artist in more than eighty national and international universities. He won first prize in the Society of Graphic Artists centennial exhibition in New York and received the lifetime achievement award for Excellence in Teaching Printmaking at the Southern Graphics International Conference in Wisconsin. His works are represented in over sixty public collections such as the High Museum of Art, Atlanta, Georgia; the Pennsylvania Museum of Art, Philadelphia; the Royal Museum of Fine Arts, Antwerp, Belgium; and Bibliotheque Nationale, Paris, France.