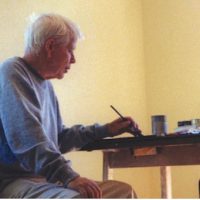 Mac Wells was known for his abstract paintings that sought to merge light and color with the unpredictability of nature. His vibrant fields of color float within rigid structures and seem to hover above the picture plane. The inner calm emanating from his canvases invites conversations between art as visual expression and nature as spiritual essence; both characteristics are paradoxically pure yet complex, opaque yet transparent, solid yet ephemeral. Although elements of his art are abstract expressionist, Wells considers himself formalist in style, “using strong lines to achieve the structural quality of his paintings.”

Born and raised in Ohio, Wells graduated with a philosophy degree from Oberlin College in 1948. He then moved to New York and studied at The Cooper Union under the tutelage of Japanese-American painter and printmaker Yasuo Kuniyoshi and encaustic painter and graphic artist Nahum Tschacbasov. Wells established professional and personal relationships with conceptual artists such as Sol LeWitt, Robert Ryman, and Jim Rosenquist. He later taught at Hunter College in New York until his retirement in 1995. Wells was a member of the American Abstract Artists because of Larry Aldrich of the Aldrich Contemporary Art Museum, Ridgefield, Connecticut, who included him among thirty-seven artists he selected for the Art in America new talent feature. He received the New Talent award conferred by Art in America (1966) and the Mark Rothko Foundation Award (1993). Wells showcased his works with the A.M. Sachs, Max Hutchison, Susan Caldwell, and Park Place Cooperative galleries throughout the 1960s and 1970s, all in New York. Public collections of his works are in national museums, namely the Denver Art Museum, Colorado; Wadsworth Atheneum, Hartford, Connecticut; the Columbus Museum of Art, Ohio; and the Guggenheim Museum, New York.