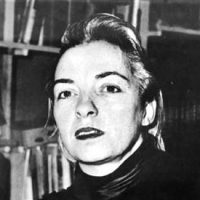 Born in Tulsa, Oklahoma in 1912, Margo Hoff came to Chicago in 1934 to attend the School of the Art Institute. It was in the Windy City that her style as a figurative painter – and to some extent even her signature approach to abstraction – were formulated in the vibrant and highly stimulating environs of Chicago’s mid-century art scene, starting with her studies at SAIC.

Hoff’s Chicago work was almost entirely figurative. Her approach to figuration was deeply influenced by the Mexican painters of the 1930s, whose work she encountered early and in person during trips to Mexico. Indeed, she and her husband George Buehr traveled south of the border numerous times, often together with artist colleagues Frank Vavruska, Eleanor Coen, and Max Kahn. In the early 1940s, when trips to Europe became increasingly difficult, many Chicago artists spent time gathering inspiration in South and Central America, and especially Mexico. The Mexican nationalists Rivera and Kahlo were important, but perhaps more key were the Mexican muralists, including Sigueros and Orozco. Where many of her generation – including Buehr – were influenced by the brushy expressionism promoted by Francis Chapin, Hoff preferred a clean, linear style. Where her earliest work was rich in volumes and modeling, she eventually began to incorporate more complex patterns, exchanging naturalism for a stylized kind of figuration. This may well have been impacted by her work as a printmaker, which was quite extensive in the ’40s and ’50s, especially in the tricky medium of woodblock, of which she was an absolute master. Some of her most emblematic images are her woodblock prints, often made in tiny editions, from this period.

At the transition point of this change from naturalism to stylization, in 1946, Hoff’s career experienced its first major boost when the Art Institute purchased her oil painting “Murder Mystery,” which is still exhibited from time to time. It remains in their permanent collection, along with several of Hoff’s works. (She was awarded four awards in the annual Chicago & Vicinity Exhibition alone, in ’45, ’46, ’50, and ’53, the latter being a first prize and “Logan award” for her panting “Stagefright.”) Hoff was extremely successful from this point on in her working life, cultivating a series of great relationships with galleries, exhibiting constantly in museums and galleries worldwide.

With a move to New York in 1960, Hoff’s work changed significantly. More brightly colored and less earth-toned, the new work was also increasingly abstract, following a turn that had begun in Chicago with works like her triumphant “City Block,” a painting that strikes a remarkable balance between abstraction and representation in the form of an overhead view of a cityscape. She took the flatness of her patterned backgrounds and brought them forward, eliminating the figure and reveling in the interaction of hue, value and tone. The excitement of her new environment, and the increased opportunities offered by the higher-profile gallery world of New York, was a great stimulant to Hoff, and she was extremely prolific throughout the 1970s and 1980s. Evolving a highly personal version of post-cubist abstraction, in which the play of hyperactive color and geometric form creates energy and motion without relying on definite perspective, Hoff’s New York oeuvre is full of masterpieces, some giant and some miniscule. Her interest in the budding world of fiber arts drew her to use more disparate materials, including rubber and fabric, in her bright, magical collages.

Although she was completely aware of the intricacies of the art world and current trends, Hoff was never interested in hopping the latest bandwagon and neither was she drawn to conceptual art or minimalism. She was always an image-maker, and she made work that vibrated, echoed, and expressed deep resonances.