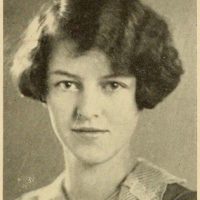 American artist  Marian Williamson Childs (1905-2006) was locally known throughout the Midwest. As the oldest of four children, Childs graduated from Wellesley College in Massachusetts in 1927 with a geology degree. After briefly working as a traveling saleswoman, she married Edmund Robinson Childs in 1929 and moved to Collingwood Boulevard in Toledo, Ohio. During this time, Childs was an active member of the Toledo Wellesley Club and volunteer for the Red Cross War Fund drive during World War II. She became co-founder and first president of the Monroe Thrift Shop in Michigan, where volunteers sold their merchandise to raise money and benefit charities throughout Monroe County. Additionally, she was a member of the Monroe Arts and Crafts League and a board member of the Monroe Historical Society. Childs and her husband were staunch art patrons, hosting a ceramics demonstration by Denzir Hinr at the Toledo Artists Club in 1949. With their combined interest in antiques, woodworking, and duck hunting, the couple collected waterfowl decoys, now at the Monroe, Michigan County Historical Museum. Childs’ other hobbies included heraldry, decorating clock faces, and reverse painting on mirrors.

Art was a tremendous part of Childs’s life, as her interest in painting was first encouraged by her maternal grandmother. She took lessons at the Toledo Museum of Art and studied in Deer Isle, Maine, with individual instructors like Signe Estabrook of Boston, Massachusetts. Childs specialized in modernist watercolors of cityscapes and still life, but she also worked in stenciling and free-hand painting. Her works were regularly exhibited at the Toledo Museum of Art—where she had retrospectives in October 1951 and January 1966—Medical College of Ohio, and other galleries in Michigan and Canada. The artist continued painting throughout her retirement at Swan Creek, Ohio, where she won statewide awards from the Ohio Presbyterian Retirement Services.