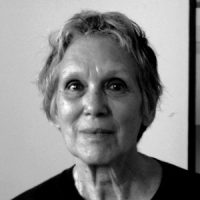 Ashbrook, who was born in Columbus, Ohio and grew up in Pittsburgh, said she was always interested in shapes.
“My mother tells me that before I could speak, I was tracing shapes in quilts, picture books – anything – with my finger,” she wrote in a handout that accompanies her Widener exhibition. So it was not surprising that she majored in art at Ohio Wesleyan University, though she said that she also considered taking up music, “and I loved math.”
After working as a staff artist designing window displays at a Macy’s department store in Toledo and designing sets in a theater in York, Ashbrook, who was married by that time, moved to Delaware County in 1958. For years after that, she said, her life was occupied by rearing three children and working to make more money than she could earn by painting.
“During that time, I worked as a librarian for five years and produced maybe one painting a year,” she said with a laugh.
But in 1973, she said, “all of a sudden, I couldn’t stand it anymore; I had to paint.”