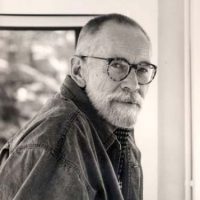 Born in Fort Plains, N.Y., Mark Adams (1925 – 2006) went on to attend Syracuse University, but left before graduation to study abstract art in New York with prominent Abstract Expressionist Hans Hoffman. Although he studied painting, Adams began his early career as a tapestry and stained-glass designer where he designed the windows for Temple Emanu-El, San Francisco’s largest synagogue, in Presidio Heights. He also did the stained glass for Grace Episcopal Cathedral on Nob Hill. His tapestry works can be found locally at the de Young Museum and at San Francisco International Airport. Later in life he turned away from tapestry and stained glass as his art came to its fullest expression and he turned to using watercolors as his primary medium. Adams’ watercolor style often involved taking everyday objects–a tie, a bowl of jello–and portraying them with new meaning through a series of vivid, delicate, and translucent color washes.