Martha Mans is a master artist in both oil and watercolor. She has received her Bachelor of Arts degree from Carlow College in Pittsburgh, PA and did graduate study at the Maryland Institute of Art in Baltimore, MD and at the University of Southern California.

Her work has been included in many juried exhibitions and has received many Best of Show Awards. She is a member of the prestigious American Watercolor Society of America and the National Watercolor Society. Her work has been included in exhibitions such as the National Academy of Design in New York, the Tokyu Gallery in Tokyo and Nagano, Japan, the Artists in Embassy’s Program, United States Embassy in Guatemala, the Salmagundi Club in New York, the Art’s For the Parks in Jackson, WY and the Governor’s Invitational in Loveland, CO.

Martha is also a master instructor who has been invited to share her vast amount of knowledge in painting at workshops in places like Italy, Turkey and Brazil as well as nearly every state in he United States.

Many publications have featured her work. These include Artist’s magazine, American Artist magazine, Southwest Art Magazine as well as the books, “Making Your Paintings More Professional” by Carol Katchen, “Exploring Transparent Watercolor” by Gerald Brommer and the Best of Watercolor, Rockport Press. Some of the corporate collections that include her work such as State of California Asilomar Collection, Southwest Bank, Mitsubishi Corp., Atmel Corp., Steven Mullens Law Offices, Colorado Springs, CO and Maruko Seimitu Kogyo Corp. Nagano, Japan.

Her work can be seen at the Hayden Hays Gallery, at the Broadmoor Hotel in Colorado Springs, CO, the Karan Ruhlen Gallery in Santa Fe, NM and the Gallery East in Loveland, CO.

Martha maintains and works in a studio in Colorado Springs, Colorado. 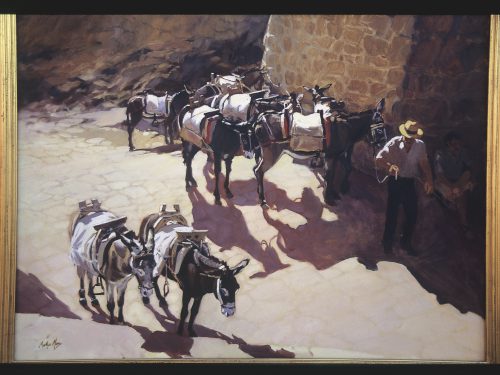