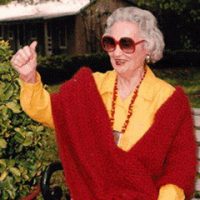 Mary Ellen Shipnes was born and raised in Indiana with an artistically talented family; her mother was a ceramicist while her father worked as an architect and taught her fine sketching techniques. The artist was popular for her oil and watercolor landscapes, featuring scenes of the Southwest and depictions of Victorian architecture in Galveston, Houston, and other Texas communities. She gravitated toward historic buildings due to the experiential depth of age and decay found nowhere in Houston’s modern structures. Shipnes participated in invitational group shows at the Dallas Museum of Fine Arts and art fairs at the Art League of Houston. Her works were exhibited at the Museum of Fine Arts of Houston and Texas Society of Painters and Sculptors at Laguna Gloria, Austin.  George H.W. Bush, de facto ambassador to China between 1974 and 1975, commissioned Shipnes to paint a Texas scene in his diplomatic residence in Beijing; he would later request another artwork during his vice presidency.

Shipnes received her formal art training in 1925 at the Boston School of Fine Arts and Crafts, now the College of Fine Arts at Boston University, Massachusetts. One of her instructors was Charles Hopkinson, an American portrait painter and landscape watercolorist. She furthered her education at The Art Institute of Chicago, studying graphic arts and etching under artist Francis Chapin. After marrying Sears and Roebuck executive Stanley Wilford Shipnes, she moved to Houston in 1944. The couple retired in the 1960s to Paintbrush Hill Farm, an eclectic farmhouse that became her studio; one side of the house was replaced with glass to let in sunlight by which she painted her landscapes and floral arrangements. Shipnes continued painting during her old age despite losing her eyesight to macular degeneration. She connected with the Huffington Center on Aging at the Baylor College of Medicine in Houston, which conducted an examination and enrolled her in the Arts in Aging program.