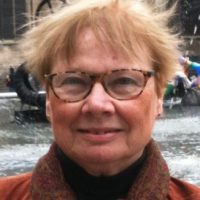 Mary Louise Gallaway Degonde is a sculptor, ceramicist, pastellist, and jeweler working across numerous mediums such as photographs, paint, bronze, or found objects. The artist is concerned with “trying to decode new cultures. The planet with its natural formations and materials but also the sky are elements present…My work is a compilation of shapes, forms, colors and textures that vary according to the project, but which reflect different facets of a single research…Whether in clay, metal, or paper, the signature is constant and the objective is always to convey the passage of time.”

A Houston, Texas, native, Degonde moved to New York in 1963 to study painting at the Brooklyn Museum of Art School and printmaking at the Pratt Graphic Art School; both schools are now the Pratt Institute. She took classes in Chinese language, culture, and calligraphy at Columbia University and was apprenticed by ceramicist Masatsugu Hitomi in Kyoto, Japan. Degonde moved to France and received her Bachelor and Master of Arts degrees from La Sorbonne, University of Paris. From 1998-2007, she was the founder and director of the Suresnes Municipal School of Fine Arts. Her work has been showcased in solo and group exhibitions at the UNESCO World Heritage Center, Paris, and the Interdisciplinary Center for the Development of the Arts, Holon, Israel, among others.

Degonde was commissioned for large public projects benefiting the city of Suresnes, some of which involved creating a bronze, brass, and glass entranceway for Cyber Espace, and fourteen columnar sculptures for the General Council of the Hauts-de-Seine County. She was awarded the Ludwig Vogelstein Foundation grant, New York, and the Suzanne and George Ramie prize at the International Biennale of Contemporary Ceramics, Valluris, France. Degonde participated in experimental workshops at the National Center for the Plastic Arts, Sèvres, France, and the Josef Llorens Artigas Foundation, Gallifa, Spain. She has written books such as Technique of Plaster Moldmaking: Elements of Modeling and Molding (1979) and collaborated with Japanese filmmaker Shohei Shibata on a movie about the worldwide evolution of ceramics (2019).