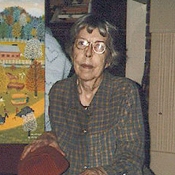 Mattie Lou O’Kelley is a popular memory painter whose idyllic landscapes depict her early life in Georgia. Born in Maysville, Georgia, O’Kelley grew up on a one hundred-acre corn and cotton farm. She attended school in Homer, Georgia, through the ninth grade, but was forced to leave after her parents could no longer afford her room and board in the town, and the seven-mile walk was too much for the young girl. She remained with her parents on the farm until her father’s death in 1943, when the land was sold. O’Kelley moved to Maysville, Georgia, where she held a series of jobs until she retired at the age of sixty, in 1968.

It was after retiring that the artist started to paint. In 1974, O’Kelley showed some of her paintings to the High Museum of Art in Atlanta. They were displayed in the museum shop, where Robert Bishop, the director of the Museum of American Folk Art in New York City, saw them. He encouraged O’Kelley and helped her obtain gallery representation in New York City, where she became an almost overnight success. O’Kelley is a memory painter; she romanticizes the rural landscapes of her youth. The artist portrays small, happy figures – both people and animals – frolicking through colorful and bucolic Georgia. Working with oils on canvas, and taking a pointillist approach to nature, O’Kelley’s extremely detailed scenes were created flat on a table rather than on an easel.