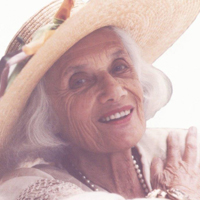 Mia Munzer Le Comte was born in Prague, Czechoslovakia and received her master’s degree there at the Academy of Fine Arts and Architecture by the time she was twenty. She also studied as an exchange student at the Berlin Academy under Karl Hofer. Later, Mia moved to Paris where she worked privately with Oskar Kokoschka and with Paul Colin, creating theatrical designs and posters.

Madame Le Comte was given one-woman shows at the Feigl Gallery in Prague, the Galerie Rousseau in Paris and at numerous galleries and museums in the USA. Soon after she immigrated to the States, Mia’s work was included in an exhibition of modern Czech artists which toured the US and Canada. Paintings by Le Comte have appeared in group-exhibitions in Prague, Paris, Nice, and from New York to San Francisco. Her works have hung in the Prague Museum of Modern Art and Ministry of Education, as well as many private collections in Europe and America.