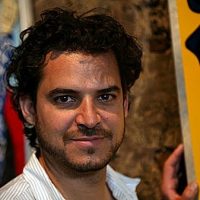 Michael Kalish owes his art career to a South Dakota license plate and a fascination with the fundamental principles of America. After spending most of his life on the baseball field, he was uncertain about what life after college had in store. “ I was driving around one day and saw this car with a South Dakota license tag. It was unlike anything I’d ever seen and I found myself obsessed with the thought of collecting license plates from all over the country and turning them into art.” Allowing his creativity to take over, Kalish began collecting tags and experimenting with ways to fuse them together to form a sculptural flag of the United States, his first piece.

Kalish’s passion led him to New York where he worked to create a pop icon collection featuring sculptures of The Beatles, Jimi Hendrix, Audrey Hepburn, Charlie Chaplin, Jim Morrison and David Letterman as well as expanding his American anthology with The Statue of Liberty, Mt. Rushmore, The Reverend Martin Luther King, Jr. and of course, The Baseball Series.

By the time Kalish added a second studio in Los Angeles, his work was showcased in galleries and included in private collections worldwide. He has been featured in The New York Times, The Wall Street Journal, US Weekly, American Style magazine, Art Business News, The London Times and has made appearances on Access Hollywood, Fox News and Good Day New York.

Kalish’s largest installation to date, The American Presidents, was displayed in the windows of Barneys, New York for the 2000 presidential election. The 42-piece installation of each U.S. president was created using the plates from each of their respective home states. His newest installation at Turner Field in Atlanta features life size baseball figures permanently gracing the stadium walls.

The subjects of Kalish’s work reference a broad sampling of American culture, from the all-American pastime of baseball and the morning cup of Java to portraits of popular, political and cultural icons. His signature medium, the license plate, embraces his ideal of Americana with his own contemporary sophistication, curiosity and distinctive style.