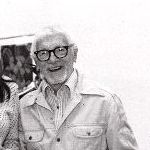 A key figure in bringing modernist painting to the Pacific Northwest, Michele Russo was known for bold use of and enlivend brush work and for his expressionist style. Artistic influences were German Expressionism and the Mexican muralists including José Orozco. Russo also did many drawings.

He was born in Waterbury, Connecticut, then a manufacturing community of many immigrants, especially Irish and Italian, and he later he referred to his childhood as having been happy and secure, which he attributed to growing up in a ghetto atmosphere where people had strong bonds with each other. His Italian father worked in a clock factory, taught himself English, and later became an insurance salesman. His mother returned to Italy for a visit with Michele and his three younger sisters, but was detained there throughout World War I. For the young Michele, it was a period of strong influence of his own culture from the ages of five to ten.

For schooling in Waterbury, he was first tutored because his immigrant family status did not entitle him to public schooling. The tutor, Giulio Perillo, was a priest who had many artists in his family. He did fabric and tombstone designs, and Michele Russo served as his assistant, which was an immersion in many aspects of art expression. Perillo was also a father figure, which was comforting for Michele, who felt very out of place in America when he returned after the war.

After being tutored, he was able to attend a public school that was progressive and was where he learned further art skills. Then for University he went to Yale, earning a Bachelor in Fine Arts degree in 1934 but not feeling happy with the curriculum, which he felt did not encourage creativity. In 1936, he and his wife, artist Sally Haley, first went West where he had a fellowship for one year at the Colorado Springs Fine Art Center, and he was pleased to be able to work under prominent faculty members Boardman Robinson and George Biddle. He became good friends with Robinson.

During the Depression Russo participated with Federal Arts Project, and did mural projects in schools including for the Nathan Hale High School in Hamden, Connecticut. He took jobs industrial jobs during World War II including working in a factory making instruments for planes and a chemical lab doing experiments.

In 1947, he and his wife settled in Portland, Oregon where until 1974, he taught at the Portland Museum Art School, now called The Pacific Northwest College of Art. There he became a major figure in bringing abstract art to an area that had been somewhat isolated from those influences on the East Coast. However, he became very attached to the Portland area. Of his life there, he said: “I feel very adjusted here in the Northwest. I don’t question myself as to whether I am a Northest atist or not a Northwest artist. I feel that I live in this region; I love this region. . . .I have strong regional feelings.” (Van Cleve)