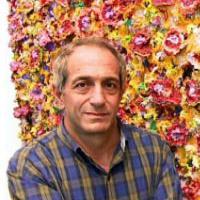 Nabil Nahas grew up in Cairo and Beirut, then moved to the United States for university studies, earning a BFA from Louisiana State University at Baton Rouge in 1971 and an MFA from Yale University in 1973. Encounters with contemporary painters at Yale influenced Nahas to move to New York, which he did after graduation. Since that time, Nahas has been based in New York. He has exhibited regularly at important New York galleries and received much critical acclaim for his work. While usually working in an abstract idiom, Nahas has capitivated audiences by his continual need for self-re-invention and the high technical finish he lavishes on his work. Nahas’ paintings have made use of geometric motifs and decorative patterns inspired by the rich history of Islamic art; at the same time, Nahas is thoroughly schooled in the tradition Western abstract painting. Sometimes these two poles combine quite provocatively in his work; usually, they are seamlessly merged into brightly-colored paintings, suggestive of the richness of nature and of the imagination. One of Nahas’ most significant innovations has been his use of the bodies of starfish, sometimes cast in acrylic paint, on top of which he layers high-chroma acrylic paint. In his most recent work, Nahas surprisingly introduces recognizable forms of cedar, pine and olive trees, native to Lebanon, in his most direct references yet to his native land. This exhibition, taking place as it does in the city of Nahas’ birth, is a fitting celebration of all he has achieved and of the artistic journey he has taken.