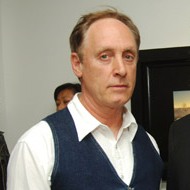 Neil Jenney is a living self taught artist born in 1945. He attended Massachusetts College of Art in 1964. In 1966 he moved to New York City where he currently resides.

His painting style was described by the art critic Marcia Tucker in 1978 as Bad Painting, a description which he has embraced. Jenney describes his style as realism, but it is an idiosyncratic use of the word on his part, meaning: a style in which narrative truths are found in the simple relationships of objects. His body of work from 1969-70, which is the period for which he was first known, was a reaction to minimalism and photo-realism. Neil Jenney has always been anti-photo. The work’s impact was large for such a brief period: according to New York Times art critic Roberta Smith “in those two years Mr. Jenney helped put representational painting on a new course and established precedents for the art of the 1970s, 80’s and 90’s.”