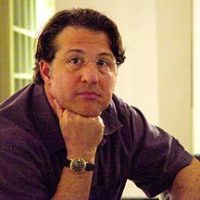 Born in Dallas, Texas, Nic Nicosia currently lives and works in Santa Fe, New Mexico. In 1974 Nic received a B.S. in Radio-TV-Film from the University of North Texas with a concentration in motion pictures. Working as a conceptual artist who uses a camera, Nic subsequently applied his cinematic mindset to the making of a still image. He fabricates and stages situations and events to be photographed and is recognized as a pioneer of the staged photographic movement that came into prominence in the early1980s.

Nic Nicosia’s first solo show in New York City was at Artists Space in 1982, followed by his work being included in the 1983 Whitney Biennial, and New Perspectives in American Art: 1983 Exxon National Exhibition at the Guggenheim. He has been included in several biennials, including Documenta IX in 1992, and a second Whitney Biennial in 2000. His work has been shown regularly in solo and important group exhibitions throughout the U.S., Canada, and Europe. In 1999 the Contemporary Arts Museum in Houston launched a retrospective of his work, Nic Nicosia, Real Pictures 1979-1999, which traveled to several venues. Another major survey of his work was exhibited at CASA in Salamanca, Spain, in 2003.

In addition to his 2010 Guggenheim Fellowship, Nic Nicosia received a Louis Comfort Tiffany Foundation grant in 1984, Awards in the Visual Arts – AVA 11 in 1991, and The Tesuque Foundation Artist Fellowship Grant in 1998.