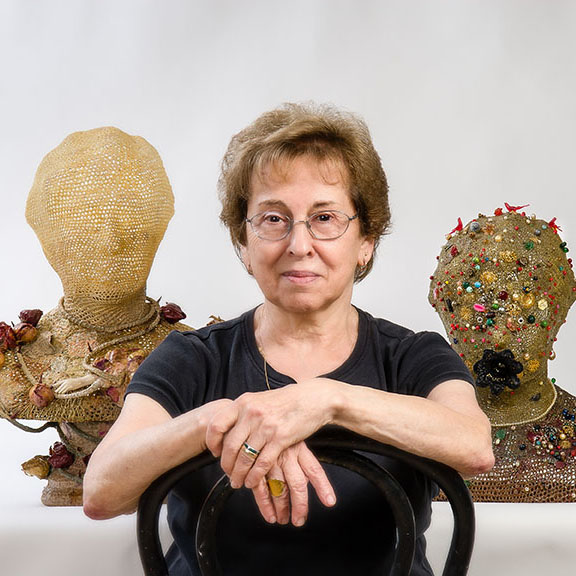 Norma Minkowitz is a sculptor of the human form who happens to use the technique of crochet to achieve her vision. For over 30 years Minkowitz has transformed the traditionally feminine art of crochet into a medium for figurative sculpture. The transparent openness of the crochet allows her to draw in three dimensions to reflect the psychological ideas beneath the surface.

Minkowitz formal study at Cooper Union in the 50’s was primarily in drawing, where she pursued portraiture and the human body as subject matter. However, almost from the start, she created in fiber with objects such as soft sculptures and wall hangings. Although she learned to crochet from her mother and had taught her daughter to crochet, she did not use the technique until the 1980’s. The breakthrough came when she crocheted over a shoe and then removed the shoe, and discovered the transparent form for which she is acclaimed. The stitches with their crosshatching harken back to her love and study of drawing. Although the basic crochet stitch is repeated like lines in a drawing, no two are identical. Minkowitz usually crochets a circular form that she molds over a form, which, when removed enhances and intensifies the inner dimension of her sculpture. The bare stitching gives a fragile, but mysterious, quality to the work that is made more illusionary by the stiffening of the sculpture with resins or epoxy.

“The hidden areas become mysterious and ominous, revealing layer upon layer of elaborate tracery that mimics the irregularities of line drawing. The momentum of motion strives to conceal and reveal each element of crosshatching, stitching, and painting in pursuit of a complex structure that invites the viewer to contemplate concept as well as process.”

Minkowitz is still exploring with her art, with hog gut, different resins, and epoxies. She has also begun incorporating found objects into her sculptures, which have become more non-representational. She has also begun to experiment in fiber still life pieces, another change from her signature human torsos. While a master of her technique, the stitching has merely simplified the manner by which she creates her art, allowing her to pursue a wide range of ideas and concepts.

Her work has received wide recognition and honors over her lifetime. In 2003, Minkowitz was named a Fellow by the American Craft Council. In 1986, she received a visual arts fellowship from National Endowment of the Arts. Her work has been exhibited around the world, including the Metropolitan Museum of Art, Museum of Fine Arts, Museum of Arts and Design, Renwick Gallery, Cleveland Museum of Art, Cranbrook Art Museum, and Kwang Ju Museum in Korea, among others. Her sculpture is part of the permanent collection of major museums including the Smithsonian American Art Museum, Detroit Institute of Art, Metropolitan Museum of Art, Wadsworth Atheneum and others who are adding her newest and evolving pieces to their collections.