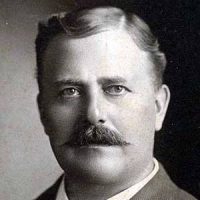 Jonas Olof Grafström was born on June 11, 1855, in Attmar, Medelpad, Sweden. His father, C. P. Grafström, was a judge for the district court.

Even as a small child, Grafström showed tremendous talent for drawing. He was sent to a high school in Näfsta, and, beginning in 1875, to the Academy of Fine Arts in Stockholm. He graduated in 1882 with other notable artists such as Anders Zorn, Bruno Liljefors, Richard Berg, and Johan Tirén. After graduation Grafström painted his way across Northern Sweden and Lapland, perfecting his landscape technique. He received acclaim for some of these paintings; one was even purchased by King Oscar II of Sweden.

In 1886, Grafström moved to Portland, Ore., and began painting the northwest. He also lived in Spokane, Washington and San Francisco. Grafström won medals in several art competitions throughout the United States, and his landscapes became popular in the Swedish-American community. Grafström also became a well-known painter of altarpieces, many of which found their way into Augustana Synod churches.

From 1893 to 1897, Grafström taught art at Bethany College. In the fall of 1897, Grafström arrived at Augustana College to become the head of the art department. Art was a new subject at Augustana. The department was established in 1894 under Mae Munroe. In addition to his classes and his own work — he painted several hundred pieces during his time in Rock Island — Grafström also gave private lessons. He was well liked by his students, offering encouragement in English and Swedish as he walked between the easels in his classroom on the third floor of Old Main.

On June 15, 1904, Grafström married fellow painter Anna Nelson of Galesburg; they had two children, Ruth and Katarina, both of whom were artistically gifted. Grafström ran the art department at Augustana until 1926, when poor health forced him to retire. He returned to Sweden after his retirement and passed away on March 30, 1933, in Stockholm.