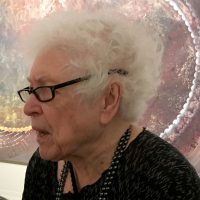 Pat Adams (b. 1928, California) is a painter and printmaker who uses a complex abstract visual vocabulary to explore metaphysical ideas for decades. Adams studied at the University of California, Berkeley, receiving her BA in 1949, and attended summer sessions at the California College of Arts and Crafts (renamed the California College of the Arts), the University of the Pacific and the Art Institute of Chicago. Adams came to New York in 1950 to continue her studies at the Brooklyn Museum Art School with instructors Max Beckmann, John Ferren and Reuben Tam, NA.

Adams has been exhibiting in solo and group shows since the late 1940s, including shows at The Whitney Museum of American Art, New York; Hirshhorn Museum and Sculpture Garden, Washington, DC; Corcoran Gallery of Art, Washington, DC; National Academy Museum, New York; Brattleboro Museum and Art Center, VT; Zabriskie Gallery, New York; and the Haggin Museum, Stockton, CA. Her work is in many public collections, including the Brooklyn Museum of Art, New York; Corcoran Gallery of Art, Washington, DC; the Philadelphia Museum of Art, PA; and the Yale University Art Museum, New Haven, CT. Adams has received many honors and awards, including a Fulbright Scholarship; the Hassam Purchase Award from the American Academy of Arts and Letters; a Yaddo Foundation residency; and a term as the Honorary Vice Chairman for the National Associated of Women Artists. Adams is represented by Zabriskie Gallerie.