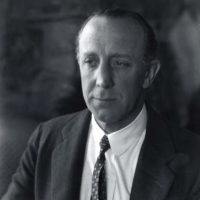 The son of J. Hampden Dougherty, a noted attorney, Dougherty grew up in privileged circumstances in Brooklyn, New York. Primarily a self-taught artist, he began sketching and drawing as a young child. This activity continued into his teenage years, during which time he received some rudimentary lessons in perspective and form from Constantin Hertzberg. At the age of eighteen, he had a painting accepted at the annual exhibition of the National Academy of Design, a considerable achievement that no doubt encouraged him to pursue his interest in art. In October of 1896, Dougherty spent three weeks in Robert Blum’s painting class at the Art Students League of New York, an experience that constituted his only formal training.

Dougherty attended Brooklyn Polytechnic Institute and then New York Law School, passing the state bar examinations in 1898. Although many expected him to follow in his father’s footsteps, he decided to become a professional artist instead (his brother Walter, also eschewed family tradition by becoming an actor and eventually president of the Players Club in New York). In 1900 he made his first trip abroad, studying independently in major art centers such as London, Paris, Munich, Florence and Venice. By 1901, his skills were such that he had a picture accepted at the prestigious Paris Salon. Returning to America in 1904, he settled in New Jersey. Shortly thereafter, Dougherty made a three-month trip to Monhegan Island, Maine, where he painted his earliest seascapes. In the ensuing years, he would make regular excursions to Monhegan, as well as to Brittany, France and St. Ives, on England’s Cornish seacoast.

On the basis of his deftly rendered marines, Dougherty rapidly made a name for himself on the national art scene. He was a regular contributor to the annuals of the National Academy of Design, where he was elected an associate in 1906 and an academician the following year. In 1907 he acquired a first-rate dealer–William Macbeth–who helped promote his reputation as an important marine painter through numerous solo exhibitions. Dougherty’s oils were subsequently acquired by many prominent museums throughout the United States. His standing in the art world was also enhanced by the coveted awards and honors that came his way, among them the National Academy’s Inness Gold Medal (1913) and a gold medal at the Panama-Pacific Exposition in San Francisco (1915). Contemporary critics lauded his skills in capturing the moods of the sea as well as his distinctive style, in which he combined a bold Realism with aspects of Impressionism; his penchant for straightforward, carefully structured designs and his ability to evoke the elemental strength of the sea prompted many to compare him to the aformentioned Homer. Yet while his famous predecessor often focused on the struggle between man and nature, Dougherty took a different approach, imbuing his canvases with a sense of buoyancy that prompted the critic James Hunker to call him a “virile optimist. Life is worth living in his outdoor pictures.” 3

Dougherty belonged to the leading art and cultural organizations of his day, including the National Arts Club, the American Water Color Society, the Century Association, the Lotos Club, the Salmagundi Club and the American Institute of Arts and Letters. While marine painting was his forte, he was a versatile also produced still lifes, nudes, landscapes and the occasional sculpture. In addition to working in oil, he often used watercolor, especially during his trips to Puerto Rico (1916) and the Orient (1916).

Dougherty resided in Paris from 1920 and 1927. Returning to America in 1928, he settled in Tucson, Arizona, hoping that its temperate climate might provide relief from his arthritis. In 1931, he moved again, this time to Carmel, California. Responding to the vivid luminosity of the West Coast, he painted brightly colored seascapes and coastal scenes that he exhibited at the Carmel Art Association and at the Bohemian Club in San Francisco. During these years, he continued to retain a strong presence in the East, exhibiting in the major annuals and winning the National Academy’s Palmer Memorial Prize in 1941.