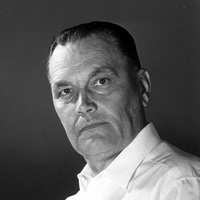 Paul Salisbury was born in Richfield, Utah. His youth was spent on his father’s ranch near the Kanosh Indian reservation. He was reared in a farming environment, bringing him close to horses and cattle. This knowledge of animals was evident in his artwork. He later recalled drawing animals before he learned to write.

The Navajo Indians were constantly traveling and working in the area. He had fond memories of his childhood, though the family wasn’t well to do. Paul was educated in Richfield schools, and then attended Brigham Young University at Provo. Here he studied under B. F. Larsen and E. H. Eastman. He was a musician, playing clarinet to support himself. He married Chloe Murdock in 1928. They later moved to Salt Lake City to continue studying art and music. He was privately instructed by LeConte Stewart, a noted Utah landscape artist. Paul spoke often of his admiration for Stewarts’ work, and owned several of his paintings. Chloe worked, usually at J. C. Penney stores, enabling Paul to complete his studies. In 1936 they moved to Los Angeles, California. They had a son and a daughter now, Paul Jr. and Geraldine. Paul played clarinet in dance bands and several orchestras, and Chloe worked with J. C. Penney, supporting their family while he still studied art.

One of the high points was being selected as a student of Frank Tenny Johnson. Western artist Frank Tenney Johnson had a great impact on Paul’s work. He emphasized painting subjects familiar to the artist, keeping the paintings “real” and natural. He used the palette, which Paul adopted in his oil paintings, consisting of only five colors and white. Black was never used after Paul studied with Johnson. He contended that black did not occur in nature, only “rich darks”. Johnson’s technique can be seen in Salisbury’s paintings. The grass, sagebrush, and foreground work in their western scenes is most evident. The night scenes of cowboys and cattle, campfires and chuck wagons are very similar.

Paul didn’t labor to make his work super realistic, or photographic. His technique suggested the detail was there, but it didn’t dominate the theme. When Johnson passed away in 1939, the Salisbury’s left California for Utah. Paul and Chloe returned to Provo, Utah with their little family, and he continued earning a livelihood from music. But soon his art work was being accepted by galleries throughout the country. The paintings he produced in the small studio behind their home were becoming more valuable.

In about 1950 – 1955, Paul approached the Springville Bank officers with a proposal that would enable him to work full-time at his artwork. Would they accept his paintings as they were completed, as collateral? If they would support him for a time, then the paintings could be shown at a one-man show and sold to repay the loan. Hopefully, Paul would make a profit. The Springville Bank had been investing in Salisbury paintings before this time. So they began an arrangement that lasted for several years. As Paul finished a painting, it would be framed, ready to exhibit and placed in the Springville Bank vaults. They forwarded him money as he needed it for family obligations. Paintings commissioned by other parties were outside of their agreement. He worked at a steady pace on the pieces for his annual show. After this monetary arrangement was no longer necessary, the bank (now much larger and re-named the Central Bank of Utah) continued collecting his work. Their four collections (horses and cowboys, cattle and cowboys, Navajos, and landscapes) are exhibited in their bank buildings throughout Utah.

It was during the late 1950’s that Paul began teaching private classes. He personally selected his students, and proceeded to teach in the same manner Frank Tenney Johnson had taught him. It was his theory that correcting problems brought into class by students enlarged his expertise. He often made the statement that he learned many times what the students did in class. Paul despised the so-called modern art being taught then at the universities. He made enemies of many of the local collegiate art professors because of their preoccupation with abstract art.

By 1960, there were only two artists living in Utah supporting themselves by selling their artwork. They were Arnold Frieberg (of the movie Ten Commandments fame) and Paul Salisbury. All the rest were teaching art for their living. Paul Salisbury had contracts with a world-wide calendar company (Bigelow) to do western paintings , and also with Leanin’ Tree Christmas Card Company. Leanin’ Tree Gallery also handled his paintings.

He was a sophisticated, gentle man, with a soft voice and easy laughter. He painted the west, especially Utah and Wyoming. He loved the mountains and preferred his cowboys and cattle “on good feed”. Perhaps it was a carry-over from his childhood. But his desert scenes were spectacular. He planned trips to Canyon De Chelly every spring and autumn to paint. The desert cliffs with the dark varnished patterns were his specialty. The saddles and horse-gear in most of his paintings are from the 1930’s and 1940’s time period. His horses were good horses, western horses, not depicting a specific breed or type. He enjoyed attending horses shows, but refused to paint portraits of show horses. If pushed to portray a special horse, he would incorporate it into two different paintings. The owners could then choose whichever one they liked best. Only the owners would know this was their champion with the nameless cowboy in the painting. If they decided not to buy the painting, it could be sold to whomever wanted it. (Never once did these people refuse the finished paintings!)

Only a privileged few were invited into his private studio. His paintings were all around the room, in various stages of completion. Some were drying, waiting further work. Paul would buy his frames custom made, but he liked to set the painting into the frame himself. He, of course, stretched his own canvases. He had a special stand built, with a small compartment to hold paints, etc. The natural wood top was inlaid with clear glass, which was his favorite palette surface. It didn’t stain, he would explain, and was easy to clean.

He had a photographic memory, and many times painted a scene entirely from memory. He felt that painting from life kept an artist fresh, but worked from 35 mm slides also. He would stand before his blank white canvas, and do a very simple drawing with vine charcoal. Fresh paint was placed on the glass palette: Zinc Yellow, Cadmium Orange, Cadmium Red Light, Alizarin Crimson, Permanent (Ultramarine) Blue, and Titanium White. Then he would begin “blocking it in”, and within a short time the canvas was alive with cowboys and horses, or with some Navajo Indians of the Southwest. This beginning piece would look finished to anyone but Paul. But it would be put aside to dry, and later added to. Sometimes it would be one of his wonderful landscapes, or a winter scene. You didn’t disturb him with a lot of talk. Watching him paint was spell binding; it took your breath away.

It was about 1960 that doctors found a small tumor in Paul’s lung. They convinced him surgery was necessary. The tumor was non-malignant, but Paul developed respiratory problems that led to pneumonia and kept him hospitalized a long time. After that surgery, the slightest cold would make him weak and ill, prone to bronchitis or pneumonia. Paul’s paintings continued to improve, his reputation to build. Western art especially was becoming popular. People liked it, and they bought what they liked. Paul began doing an occasional painting he called ‘Early Americana’. They were old west subjects, of Indians hunting buffalo, and buckboards and cattle drives. They became very much in demand by collectors. He was reaching a zenith in his abilities. But the respiratory problems from that earlier surgery had damaged his heart.

Paul Salisbury passed away in the Utah Valley Hospital at Provo. He had undergone open heart surgery, then developed pneumonia in the recovery room. He lingered in intensive care for several days before succumbing. He was 69 years old. It was a tragic loss to his family, his friends, and the art community of Utah. The last painting he had been working on was two Navajo women (in native hairstyle and dress) on their horses at a desert tank. (A tank is runoff water trapped in the sandstone.) A colt is wandering in the foreground, with brilliant blue sky above and bare canvas below.