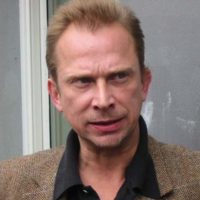 Per Dybvig, an illustrator and fine artist from Stavanger, is known particularly for his raw and fantastic animal figures in a number of popular children’s books and for his burlesque detailed drawings. His work has won many awards and been exhibited internationally. Dybvig studied graphic design at the Bergeland Vocational School from 1983 to 1985. He spent several years as an illustrator for the Rogalands Avis and Stavanger Aftenblad newspapers and has worked on some 80 books since 1988. These include more than 20 children’s books, many of which were major successes with readers. He illustrated books of Trond, Benedikt and Kaja Benne like Uvenner, Marit Nicolaysen’s Svein og rotta series, Bjørn F. Rørvik’s picture books Reven og Grisungen and Jo Nesbø’s children’s book series about Doktor Proktor. Per Dybvig divides his time between Stavanger, Norway and Berlin.