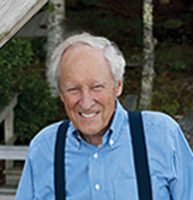 Peter was born in 1934 to a family of successful artists. His father was the noted Norwegian/American portrait painter Bjorn Egeli, and his mother, Lois, was also an accomplished artist. From early childhood, they began Peter’s study of painting and drawing, and in his teens he studied painting at the Corcoran Art School in Washington, D.C.

After a tour of duty in the Marine Corps, Peter enrolled at the Maryland Institute of Art in Baltimore. His principal instructor at the institute was Jacques Maroger and in his final year there Peter won first prize in the Senior Concours. Upon graduating, he attended the Arts Students League in New York and later George Washington University in Washington, D.C. From 1960 to 1967, he taught drawing and painting at St. Mary’s College of Maryland.

Peter Egeli is respected as one of the top portrait artists working today. His portraits draw attention and admiration wherever they hang, from the halls of the Pentagon, the distinguished collection of Johns Hopkins Hospital, and the boardrooms of many Fortune 500 companies, to numerous Federal courthouses and cabinet offices. His work is sought after for its powerful likeness and evocative presence.

Painting maritime scenes has also long been a passion for Peter and he is a charter member, Fellow, and past president of the American Society of Marine Artists. His has been the life of a renaissance man, designing and building boats, exploring the coasts by water and painting the subjects he knows so well. His marine paintings are in numerous distinguished public and private collections.

Peter Egeli continues to paint portraits, landscapes and marine paintings, working every day both in the studio and on location. He and his wife live and work at their waterfront farm in southern Maryland most of the year and during the summer in East Boothbay, Maine.