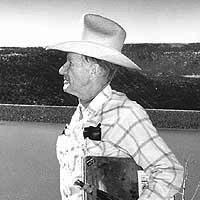 Peter Hurd (February 22, 1904 – July 9, 1984) was an American artist, born Harold Hurd, Jr., in Roswell, New Mexico. Nicknamed “Pete” by his parents, he later legally changed his name to Peter.
Hurd enrolled at New Mexico Military Institute in 1918 as a high school freshman where he began a lifelong friendship with writer Paul Horgan.
Intending to pursue a military career, in 1921 Hurd entered the United States Military Academy at West Point, New York. After two years, however, he resigned from the Academy to enroll at Haverford College in Pennsylvania.
Hurd soon began studying under the illustrator N.C. Wyeth. He worked as Wyeth’s assistant at Chadds Ford, Pennsylvania, for a number of years. In 1929, he married Wyeth’s daughter, Henriette Wyeth, an artist who later became known for her portraits and still life paintings.
Hurd was a war correspondent for Life during World War II.
From 1953 to 1954, Hurd, assisted by his protégés Manuel Acosta and John Meigs as well as his wife Henriette, painted a fresco mural in the rotunda of what was then the West Texas Museum (now Holden Hall) at Texas Technological College (now Texas Tech University) in Lubbock. Hurd painted about one fresco per week over a two-year period, with depictions of pioneers and influential leaders of West Texas. Those portrayed on the mural include the merchant Crone W. Furr, founder of Furr’s Supermarkets, Robert Franklin Dunn, a pioneer Methodist minister and circuit-rider, journalist James Lorenzo Dow, cattleman William E. Halsell, philanthropist Dora Nunn Roberts, oilman Sid W. Richardson, and physician Marvin C. Overton. One panel, entitled “The Chroniclers”, depicts historian J. Evetts Haley, William Curry Holden, Tom Lea, and John A. Lomax gathered around a blazing campfire. Hurd himself is also in the scene, sketchpad in hand.
In 1957, he collaborated with Folkways Records and released his album, Spanish Folk Songs of New Mexico, a collection of ranching songs. By 1958, his recognition had spread, and he was appointed to the President’s Commission of Fine Arts.
In 1967, he painted what would have been Lyndon B. Johnson’s official portrait. President Johnson only allowed Hurd one sitting, during which time Johnson fell asleep. Hurd hence had to use photographs of Johnson to finish the painting. Johnson did not like his portrait, declaring it “the ugliest thing I ever saw.” The painting is now part of the collection of the National Portrait Gallery, in the Smithsonian Institution. Hurd’s Time Magazine cover portrait of Charles C. Tillinghast, Jr. was featured in a National Portrait Gallery exhibit of the magazine’s cover art that opened in 1969. Hurd died in 1984 in Roswell.