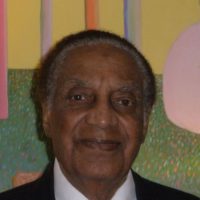 Peter Robinson Jr. graduated from Armstrong and then attended Howard University for three semesters prior to preparing to enter the draft for WWII. He graduated from Howard in 1949, after studying under the eminent Art faculty members James Porter, Lois Jones, and James Wells. With a deep connection to nature and a lifetime of artistic curiosity, Robinson embarked on a career as an illustrator that would literally lead his thoughts and talents into the heavens. After breathtaking success as a cartographer for the 1950s Census Robinson managed the flow of information at the General Services Administration before being recruited to help design the War room at Andrews Air Force Base.
In 1957, the Polaris Missile Program, under the Navy Department, head about what Robinson Jr. was doing at Andrews Air Force Base with incorporating art and graphics into the Management Center/War Room concept of Information Management, and offered him a position doing the same thing for the Polaris Missile Program.
At the peak of the Cold War, the three year-old NASA recruited Robinson for his exception talent ‘Art was the catalyst through which the managers could communicated with the engineers and with physicists, scientists, with Congress, and with the defense Department.” Artwork was often the only means to communicate the goals of the Apollo Program and subsequent launces.