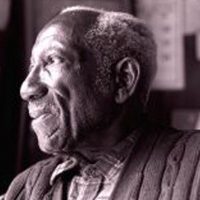 Born in Wando on Daniel Island, near Mt. Pleasant, South Carolina, where he was reared by his grandparents. At age 8, he was sent to Charleston (via the ferry), to live with his mother on Vernon Street and enroll in the first class at Buist School.

At the time, the school on Daniel Island offered limited education because it was an agriculture and fishing community. It was open for only three months and teachers were difficult to keep.

While walking to and from school young Philip noticed the ironwork and became intrigued with it. The neighborhood was a Mecca for craftsmen who serviced the waterfront businesses. He began visiting the blacksmith shops, pipefitters, shipwrights, coppers, and other craftsmen in the area. However, the sounds of the blacksmith shops interested him the most.

Philip Simmons, was the most celebrated of Charleston ironworkers og yjr 20th Century. He received his most important education from local blacksmith Peter Simmons (no relation), who ran a busy shop at the foot of Calhoun Street. It was in that environment where Philip Simmons acquired the values and refined the talents that would sustain him throughout his long metalworking career.

Moving into the specialized fields of ornamental iron in 1938, Simmons fashioned more than five hundred decorative pieces of ornamental wrought iron: gates, fences, balconies, and window grills. The city of Charleston from end to end is truly decorated by his hand.

In 1982, the National Endowment for the Arts awarded him its National Heritage Fellowship, the highest honor that the United States can bestow on a traditional artist. This recognition was followed by a similar award from the South Carolina state legislature for “lifetime achievement” and commissions for public sculptures by the South Carolina State Museum and the city of Charleston. Simmons was inducted into the South Carolina Hall of Fame in Myrtle Beach, SC on January 31, 1994. “The Order of the Palmetto”, South Carolina’s highest award, was presented to him on August 11, 1998 by Governor David Beasley. In 2001, Philip Simmons received the Elizabeth O’Neill Verner Governor’s Award for “Lifetime Achievement in the Arts.” And on May 12, 2006, he was the recipient of the Honorary Doctorate of Fine Arts by South Carolina State University in Orangeburg.

Pieces of his work have been acquired by the National Museum of American History, Smithsonian Institution; the Museum of International Folk Art in Santa Fe, NM; the Richland County Public Library, Columbia, SC, and the Atlanta History Center, Atlanta, GA. In 1989, the vestry and congregation of his church (St. John’s Reformed Episcopal Church, 91 Anson Street in downtown Charleston), dedicated the grounds of the church to develop a commemorative landscaped garden as a tribute to his exceptional mastery of wrought iron and in recognition of his inspirational character and self assurance. Other works can be seen on Daniel Island, the Governor’s Mansion and the Matthew J. Perry Federal Courthouse in Columbia, Liberty Square, the Charleston Visitor Center, and in the main corridor of the Charleston International Airport.

Philip Simmons went to his rewards on June 22, 2009 at the age of 97. He spent most of his time after retiring from active forging (until his health began to fail) greeting the tourist who visited his shop and having Q&A sessions with the students and organizations he visited around the state. His craft is being continued at his shop through the hands of his apprentices, Carlton Simmons (nephew) and Joseph “Ronnie” Pringle (cousin), His home will be a museum house with a gift shop and is scheduled to open in 2010.

Mr. Simmons was a widow and had three children (one daughter is deceased). He lived on the eastside of Charleston since arriving in 1919. He always was a kind and gentle human being who was willing to share his experiences and wisdom with anyone he met. A professional, whose work was his only advertisement, left a legacy of excellence and pride in ones work to the youth and other professionals around the country.