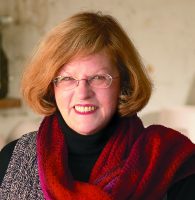 In the Tanami series colors and surfaces are produced in a complex, highly crafted process. First three or four layers of colored glazes and stains are sprayed on the outside surface of the vessel. These have been prepared with certain levels of density, transparency and gravity induced running in mind though the final outcome is always impossible to predict.

The inside of the vessel is colored by half filling it with colored glaze and swirling it round until a perfectly graduated coloring is produced. An evenly colored inner void in which form becomes a function of light is essential to the overall presence of the work and this sublimely sensitive density cannot be achieved with spraying alone, which leaves a dry powdery effect.

The groups of clusters of lines in crystalline vitrified glazes moving roughly horizontally round each vessel are made by applying color into incised lines after the initial spraying of glazes. Using Liquitex painting medium as a resist does this very accurately. It is much more precise than wax or latex and burns away without creating a vile odor or any other environmental problems. It has the disadvantage, however, that it dries and spoils rather quickly. The blades used for this work also wear out after a few minutes work. Only a small patch of surface can be worked on at a time.

Once the surface is incised, special dry brushes are used to brush out the groves and to clean up the edges of the Liquitex resist so that no ragged fragments or particles affect the glaze. Then thick colored glazes, the consistency of a paste, are rubbed into them. A single pot can take several days to prepare and ‘paint’ in this way. Sometimes a further transparent glaze is rubbed over the surface. However, only one firing is possible without risk and a successfully fired pot is so vitreous it rings like a bell.

I developed this technique by working for several weeks on shards doing all kinds of drawings and it eventually became clear that different ‘traces’, those lines that resonate with the form of the vessel, were the most appropriate way of creating a sympathetic resonance.