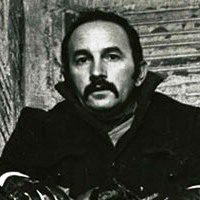 Rafael Ferrer was born in Santurce, Puerto Rico in 1933, and presently lives and works in Greenport, NY. Ferrer has exhibited extensively, and was included in the groundbreaking show “Anti-Illusion: Procedures/Materials” at the Whitney Museum of American Art in 1969. He has participated in two Whitney Biennials as well as a solo installation at the Whitney in 1971 and was one of the first artists to do a “Projects” installation at the Museum of Modern Art in 1974. In 2011 he is scheduled to have exhibitions at Guild Hall, East Hampton, New York and the Lancaster Museum of Art in Pennsylvania. His work is in the permanent collections of the Museum of Modern Art, the Metropolitan Museum of Art, the Whitney Museum of American Art, Museo de Arte de Puerto Rico, El Museo del Barrio, NY, the Philadelphia Museum of Art, the Museum of Contemporary Art, Chicago and the Lehmbruck Museum, Germany, as well as many other public and private collections.