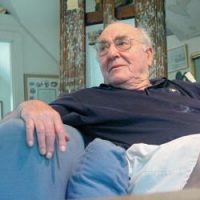 RAY ELLIS has been painting for over seventy years on all seven continents. In 2004, the Telfair Museum of Art in Savannah, Georgia honored the depth and breadth of Ellis’ career with a major traveling exhibition titled Ray Ellis in Retrospect: A Painter’s Journey. He was subsequently awarded the Salmagundi Club’s Medal of Honor for lifetime achievement in the Arts.

Ellis was born in Philadelphia and attended the famed Philadelphia Museum School of Art. His first one-man show was held in 1947 at the Pennsylvania Academy of Fine Arts. After serving four years in the Coast Guard during WWII, he founded his own advertising agency in New Jersey and New York, but continued to paint in his spare time. During this period he was elected to the American Watercolor Society, and his works were widely exhibited and received numerous honors.

In 1969, Ellis was able to devote all his time to painting. In 1974 he moved south to Hilton Head Island, South Carolina and then to Savannah, Georgia. He later resettled on Martha’s Vineyard where he maintains a home and studio.

In the early 80’s, Ray Ellis and Walter Cronkite collaborated on a series of fine art books which celebrate America’s coastlines: South by Southeast, North by Northeast and Westwind. Many books have been published since: The Spirit of Golf, The Road to Ballybunion, Ray Ellis’ Savannah & the Lowcountry, Martha’s Vineyard: An Affectionate Memoir, Coastal Images of America, Fishing the Vineyard, and Lowcountry. The catalog that accompanies the retrospective exhibition is titled Ray Ellis in Retrospect: A Painter’s Journey. One of Ellis’ favorite subjects is flowers and gardens. In 2005, a book of select garden paintings was published, titled Ray Ellis Paints Flowers. Ray Ellis’ 15th and most recent book, By the Light of the Moon, showcases a theme that has captivated him for many years – moonlight.
For three consecutive years beginning in 1998, Ellis was commissioned by the President to paint scenes of the White House to be reproduced as the official Christmas card.