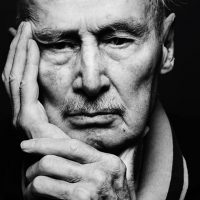 Since the early 1950s, Richard Artschwager has forged a unique path in twentieth century art, making visual comprehension of space and the everyday objects that occupy it strangely unfamiliar. His painting and sculpture have been variously described as Pop Art because of its derivation from utilitarian objects and incorporation of commercial and industrial materials; as Minimal Art because of its geometric forms and solid presence; and as Conceptual Art because of its cool and cerebral detachment. But none of these classifications adequately defines the aims of an artist who specializes in categorical confusion and works to reveal the levels of deception involved in pictorial illusionism. An anonymous sheet of walnut–pattern Formica is both itself and a depiction of a wooden plane; a table or chair is furniture, sculpture, and image all at once; and a painting or a sculpture can be a “multi–picture” or a “three–dimensional still life.” Artschwager’s approach focused on the structures of perception, striving to conflate the world of images, which can be apprehended but not physically grasped, and the world of objects, which is the same space that we ourselves occupy. His last body of work marked a departure from his previous series, in that the images he had composed from sources in popular culture communicate overt, if deadpan, allusions to current political issues.

Richard Artschwager was born in 1923 in Washington D.C., and died in 2013 in Albany, New York. He received his B.A. in 1948 from Cornell University, New York, followed by a period of study under Amedée Ozenfant, one of the pioneers of abstraction. In the early 1950s, Artschwager became involved in cabinetmaking, producing simple pieces of furniture. After a ruinous workshop fire at the end of the decade, he began making sculpture using leftover industrial materials, then expanded into painting, drawing, site-specific installation, and photo-based work. Artschwager’s first exhibition took place at the Art Directions Gallery, New York in 1959, followed by the first of many solo exhibitions with Leo Castelli in 1965. Recent solo exhibitions include “Up and Across,” Neuesmuseum, Germany (2001, traveled to Serpentine Gallery, London); MAK, Vienna (2002); Kunstmuseum Winterthur, Switzerland (2003, traveled to Kaiser–Wilhelm–Museum, Germany; and Staatliche Graphische Sammlung, Munich); “’Painting Then and Now,’” Museum of Contemporary Art, Miami (2003); “Up and Down/Back and Forth,” Deutsche Guggenheim, Berlin (2003); “Hair,” Contemporary Art Museum, St. Louis (2010); “Richard Artschwager!,” Whitney Museum of American Art, New York (2012, traveled to Hammer Museum, Los Angeles; Haus der Kunst, Munich; and Monaco National Musée Nouveau, Monaco); and “Punctuating Space: The Prints and Multiples of Richard Artschwager,” The Frances Lehman Loeb Art Center at Vassar College, Poughkeepsie (2015).