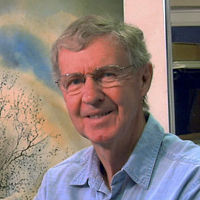 “I have lived and worked in Iowa and the Midwest all my life and I’ve done a lot of looking at the sky and ground around us. The urban and rural landscapes and especially the variety of experiences encompassed in changing of the season have become ingrained in my understanding and approach to life and my art,” says Richard Leet about his work.

Leet started as an art instructor in Oelwein Community Schools in 1958, and went on to become the Founding Director of the Charles H. MacNider Museum in Mason City for the next 36 years. Along the way he lists his professional career experiences to include being a painter in oil and watercolor, teacher, arts administrator, public speaker, cartoonist, illustrator, writer and designer. Leet was founder of NE Iowa Art Association and served as its president, was Associate member of Iowa Designer Crafts Association, and Artists Equity Association. Appointed by the governor, Leet served on the Iowa Arts Council for 6 years. He has written monthly art columns for Mason City Globe Gazette, and been awarded to the Iowa Museum’s Association’s “Hall of Fame”.

Richard Leet has exhibited in over 200 competitive, group and invitational shows across the country, with one person shows across the Midwest, including ” Leet: 30 Years of Painting” a retrospective that showed at five sites over two years. The artist has won numerous awards including a Patron Award in “Watercolor USA”, and is represented by galleries around the region. His work can be found in collections of institutions and organizations, among them the Des Moines Art Center, El Paso Museum of Art, US Bank of Omaha, and the Pillsbury Corporation.

Richard Leet currently lives at home in Mason City, where he has a studio in the Historic Brick & Tile Building, and spends winters in the southwest. He is married to Kay, and has a son Todd, and a daughter Kim Funkhouser, who lives in Fairfield.